Let’s get one thing straight: Konstantin Gropper is the Caspar David Friedrich of his generation; strictly musically speaking, of course. In case you don’t know, Friedrich was the most important ROMANTIC painter of the 19th century. “He is best known for his mid- period alegorical landscapes which typically feature contemplative figures silhouetted against DRAMATIC night skies, morning mists, barren trees or gothic ruins” (Wikipedia).

Similarly, Konstantin’s musical vehicle, GET WELL SOON is best known for its hugely ROMANTIC, allegorical songs, full of DRAMA, morning mist and night skies. No gothic ruins though. So when this young man handed us his new album, ominously entitled “The Scarlet Beast O’Seven Heads” and presented it to us as his “summer record” we chuckled with delight as, clearly he was joking. Well it turned out he wasn’t.

I suppose first we need to forget everything we know about summer. Forget about campfires and the summer holiday spirit, for the former “German Wunderkind” (NME) Konstantin Gropper summer seems to be a feverish trip down doomsday alley, or a sweaty half asleep nightmare about Helmut Berger and Donald Sutherland. Although according to Gropper this time around the album, or at least some songs, have been a desperate attempt to not write about the end of the world. He only half succeeded.

The story of this record almost sounds like a Sam Pekinpah plot, without that director’s signature slow-mo-is-death-mo-showdown. A highly talented and successful young man from the metropolis of Berlin finds himself back in small town Mannheim, locking himself into solitude and reflecting on what he does best; composing and producing music. The result is one of the most sophisticated pop albums of the year: ‘The Scarlet Beast O’Seven Heads’ – ‘La Bestia Scarlatta Con Sette Teste’. The album features 13 new, wildly imaginative and of course opulently arranged songs. It is, in certain moments, a colourful and beautiful nod to the genre we know as ‘Cinema Italiano’ (think Nino Rota or Argento), though these masters of the strange, wild and adventurous are just one of the 3,227 inspirations that went into the making of this new ornate Get Well Soon masterpiece.

Konstantin Gropper is not getting away from the wide-screen format and the world of pain that made him and his band an overnight sensation with their debut album “Rest Now …”. Whether he is writing music for Wim Wenders movies, French ARTE “high-brow porn miniseries” or working on his own, heavy-hearted pop epics, his dedication is unlimited. In the Get Well Soon universe everything sounds big; even the smallest, most intimate of moments ooze a certain grandeur. And yet, with all this glory, the baroque pop of Get Well Soon has nothing to do with delusional pointless orchestral bubbles that a lot of bands try to enhance their songs with.

The record starts off with a very modest and melancholic “Prologue“ wherein the young auteur first and foremost encourages himself for the task that is to come; the creation of something new, to be thrown to the masses for the inevitable critical examination. “Let Me Check My Mayan Calendar” follows, a slightly ironic parody of the doomsday hype of the last 12 months (or year), utilizing splendid moments of past Italian easy listening instrumentals. And so the album marches on, with a complex anti-cynicism-anthem (“The Last Days Of Rome”), a neat little study of the post-no-future generation, “The Kids Today“, featuring a wonderfully extensive use of weirdo synths and crude 80s drums. The anthemic “Roland I Feel You”, is a genuine hit, if we’ve ever heard one, and comes from a fine line of GWS songs that are inspired by German film directors, who found fame and success overseas. Only moments later the summertime swing of “Gallows ” picks up the current world of economic crisis while displaying an impressive prime example what is possibly the greatest achievement of this new Get Well Soon album: playful, buoyant and magical music that manages to cunningly disguise the dark valleys Gropper walks us through all the while.

The journey through Gropper’s own “personal theme park”, as he calls it, continues on from the late Henry Darger to the even later Wendy Carlos, whose name once was Walter. Next you know, Gropper lashes out at the wonderful world of esotericism, life coaching and crystal skulls, only to arrive at the last song, the grande finale, the last great glitzy disco anthem and a nod to all the troubled women that ever appeared in Alfred Hitchcock’s greatest movies. A rousing dance anthem and a suitable conclusion to this great new Get Well Soon album.

Gropper and his cohorts will be taking their impressive live show to the stages around Europe all throughout this fall and in the meantime the hugely prolific Mr. Gropper just doesn’t stop. As we type this, he is producing yet another movie end credit song, he is writing the musical score for the reputed Frankfurt State Theatre, and sitting on packed bags for a tour of South Korea. Just another typical day for the young and restless. 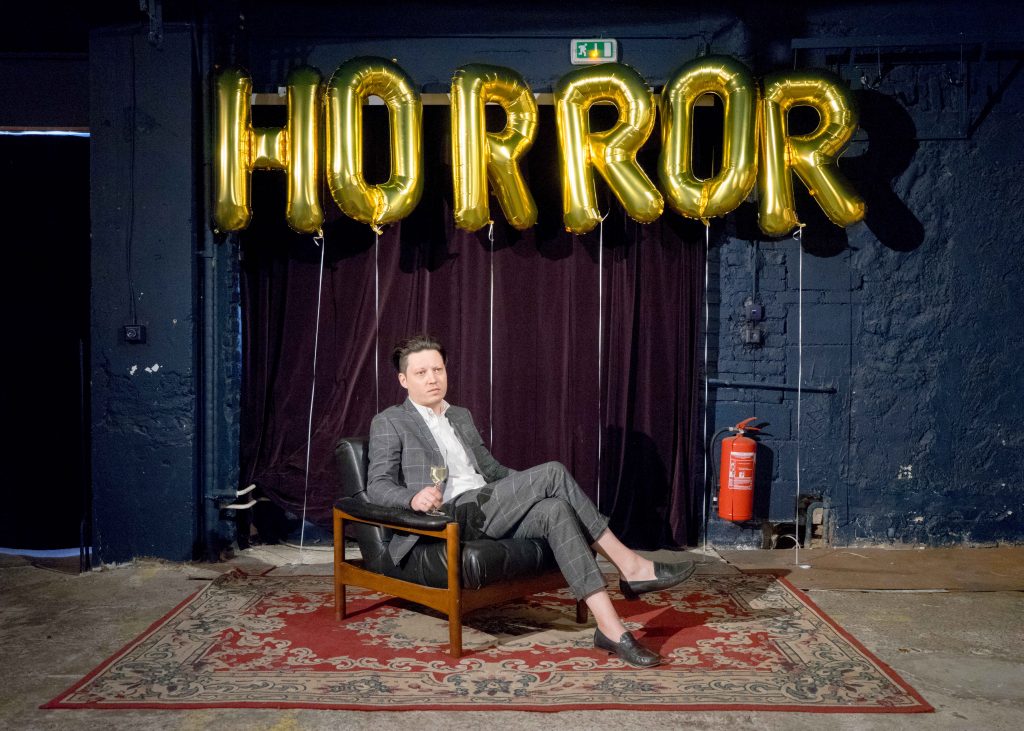