Sacri Cuori, Fellini’s bastard children, are on the road again.
Hailing from Romagna, Italy, the band is led by guitarist/producer Antonio Gramentieri and plays instrumentally topographical music that mirrors the terrain they actually experience, whether it be a Rimini beach full of nostalgia and desire or the Mojave desert in the dead of winter.
Sacri Cuori have created a stunning cinematic ouevre over their own records and in the meantime they have also been choosed as a live&studio band by Richard Buckner, Howe Gelb, Dan Stuart (Green on Red), Hugo Race and many others, including italian heroes Vinicio Capossela and Il Pan del Diavolo.
They tour worldwide, including Australia and eastern Europe, appearing in several festivals and crossing the border of nations and genres. They are now recording their 3rd record, out in the spring, featuring the beautiful voice of australian/italian diva Carla Lippis.
In 2014 Sacri Cuori composed and played the original score for “Zoran – il mio nipote scemo”, a cult movie who got several awards from the Venice Film Festival on, and it’s not all over Europe and Australia (Lavazza Film Festival).
The soundtrack itself won the “best soundtrack of the year” at Est Film Festival.
What about their music?
Let’s call Adriatic Twang, somewhere between old time dance music from their native Romagna and Lynch’s Mulholland Drive, between the dream of the ‘50s and the nightmares of the future, Santo and Johnny and Brian Eno.
And a lot of Italy’s taste for soundtracks on top of it all.
Of course Ennio Morricone and Nino Rota are present, but it’s also about Riz Ortolani, Piero Piccioni, Piero Umiliani, Armando Trovajoli and several other maestros of the golden age.
Well, Ry Cooder and The Champs may appear in their songs too, but Billy Strange looms as large as the American Myth, only to die as the songs came to life.
Sacri Cuori’s enlarged family – which appears in records and sometimes in live shows – feature a lot of impressive names: Jim Keltner, Marc Ribot, Robyn Hitchcock, Joey Convertino from Calexico, JD Foster, David Hidalgo of Los Lobos, Stephen McCarthy of Long Ryders, James Chance and John Parish.. 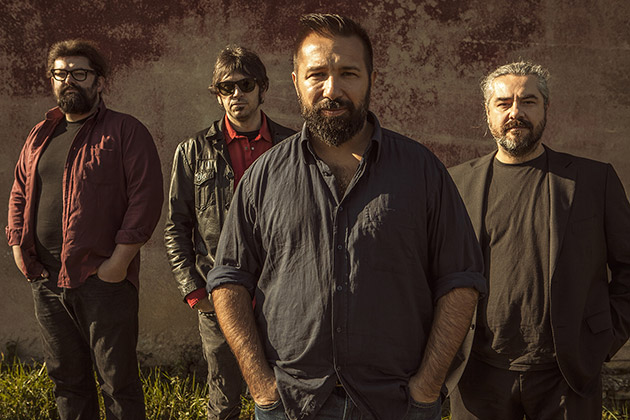