With three GRAMMY® nominations and 11 albums to his name, McCaslin’s path to Bowie and Beyond Now can be traced back to 2011 with the release of his album Perpetual Motion, taking on an electric direction for the first time in contrast to his previous acoustic projects. Two subsequent albums Casting for Gravity (2012) and Fast Future (2015) released with his working band were directly influenced by electronica artists (covering groups such as Aphex Twin, Boards of Canada, and Baths), which netted McCaslin a 2013 GRAMMY® nomination for “Best Improvised Jazz Solo.”

The once in a lifetime opportunity to work with David Bowie came after composer Maria Schneider, a longtime collaborator, recommended McCaslin and his group to Bowie. Schneider and Bowie were collaborating on the track “Sue (Or in a Season of Crime),” which featured McCaslin as a soloist. In June 2014, Bowie heeded Schneider’s advice and made a visit to hear McCaslin and company at the 55 Bar in Greenwich Village. Soon after, Bowie began corresponding with McCaslin over email and sending music, forming a new collaboration and friendship that transpired through the recording of Blackstar until Bowie’s passing. The result is Beyond Now, which documents “David Bowie’s Last Band” as they were processing both their grief and Bowie’s distinctive impact. 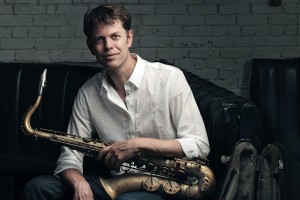